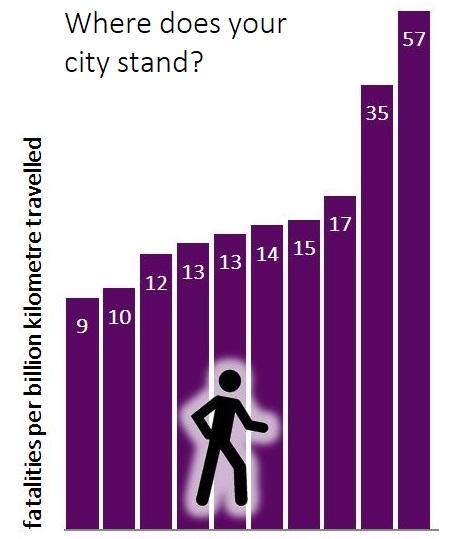 Safer City Streets is the global traffic safety network for liveable cities. It brings together cities wishing to improve their urban road safety performance by sharing data, experiences and knowledge – by learning from each other.

Every minute, a person dies in city traffic. Among people killed on city streets, 8 out of 10 are pedestrians, cyclists and other vulnerable road users. Where streets are seen as dangerous, efforts to promote walking and cycling are undermined. Reducing the risks of urban traffic thus not only saves lives: it unlocks sustainable forms of transport which reduce pollution, cut emissions, fight congestion and improve the physical and mental health of citizens – in short, safer streets are a key to make a city more liveable.

Nearly 50 cities have joined Safer City Streets since the network's launch in 2016 at the UN Habitat III conference. The network is managed by the International Transport Forum (ITF), which collects, validates and analyses relevant data from cities in a dedicated database.Member cities have access to policy-relevant data, a network of experts, targeted analyses and a global road safety benchmark.

Safer City Streets is modelled on the global road safety network of countries hosted by the ITF, which has run for more than 25 years, and which is known as the International Traffic Safety Data and Analysis Group (IRTAD). The IRTAD Group has been hailed by the World Health Organization as “a model of a multi­-country effort” and its crash data as “simply the best in the world” by Global NCAP, the car assessment programme.

New cities are welcome! A brochure is available in English and español. To learn more, contact Alexandre Santacreu.

The Safer City Streets nework is supported by