The risk to die in a traffic crash varies greatly for the different forms of transport among cities. The risk for a pedestrian to be killed in a crash is six times higher in some cities than in others, and the risk of being killed on a bicycle varies ten-fold (see chart 2).

“Our benchmarking exercise provides evidence for the large differences between cities that experts long assumed. What’s important is that citizens and their elected officials can now see black on white how their city compares to others," said Alexandre Santacreu, Safer City Streets project lead at the International Transport Forum. "

This will enable them to ask the right questions about how to make their city’s streets safe. With this work, we identify which cities they should learn from in order to close the gap. Cities that do not perform so well should not despair, they can now measure the room for improvement and learn a few tricks from their peers." 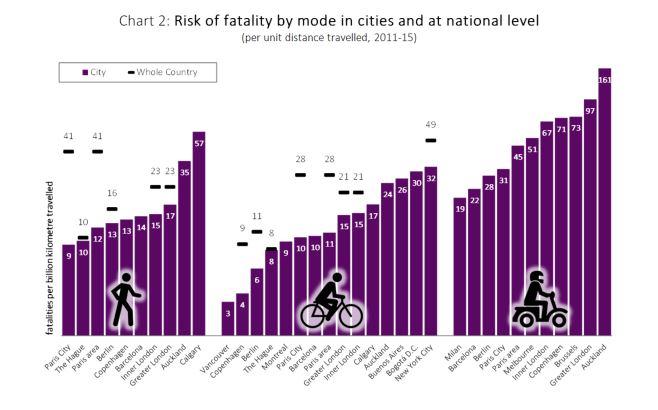 Urban traffic safety is a growing concern as cities strive to become more liveable. Over the past decade, the number of road deaths in cities has decreased much more slowly than on the national level. 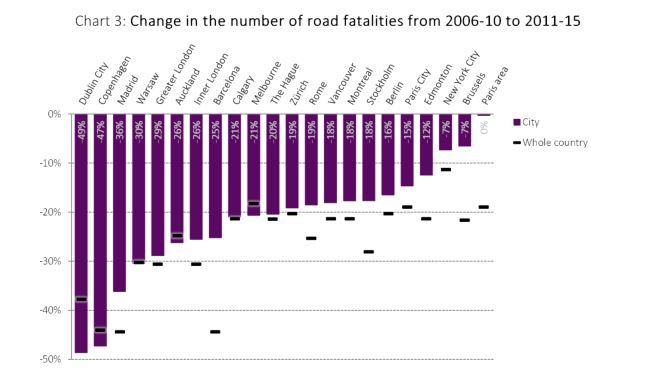 One of the reasons for the slower progress is that city traffic has a high share of vulnerable road users: pedestrians, cyclists and users of motorised two-wheelers make up 78% of traffic participants, while the national median is 43%.

The report recommends that cities should:

"Just one death or serious injury on our roads is one too many. That is why we are working hard in Greater Manchester to make our streets as safe as they can be, especially for some of our most vulnerable road users, including cyclists and pedestrians. This will not only save lives, but encourage more people to choose these sustainable and active ways of getting around our city-region."

“Road safety is a complex problem and there isn’t one simple solution. We will need to implement a range of measures to reduce the number of deaths and injuries on our streets, including new infrastructure, education, policing and technological innovation. To target these correctly we need the right data; that is why initiatives like Safer City Streets are so important, so that we can share information and learn and collaborate with our global counterparts.”

"We welcome the findings of this benchmarking report and are pleased to have contributed to it. The opportunity to share best practice with other cities is extremely valuable. Good quality data is vital for us to understand what is happening on the roads, so we can intervene as effectively as possible.”

“We are committed to a Vision Zero approach to eliminate death and serious injuries on London’s roads, through working with the police on enhanced enforcement and visibility, investing in safer cycling infrastructure and creating a world-leading Direct Vision Standard for heavy goods vehicles to remove the most dangerous vehicles from the British capital’s roads.”

Paula Bisiau, Undersecretary of Sustainable and Safe Mobility of the City of Buenos Aires, said:

"Promoting data-driven public policies is essential in reducing traffic fatalities and serious injuries. In this sense, the City of Buenos Aires is increasingly using the information provided by Safer City Streets to define priorities, to design targeted actions at each specific user group and to evaluate the impact of the implemented measures."

The 4th Safer City Streets meeting is again organised in partnership with the POLIS Network – Cities and Regions for Transport Innovation (website).