Evolution of transport infrastructure investments since before the financial crisis 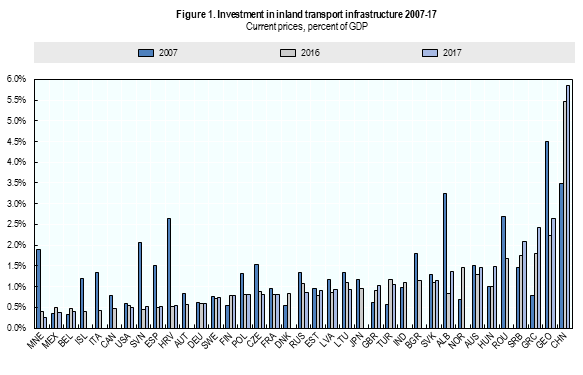 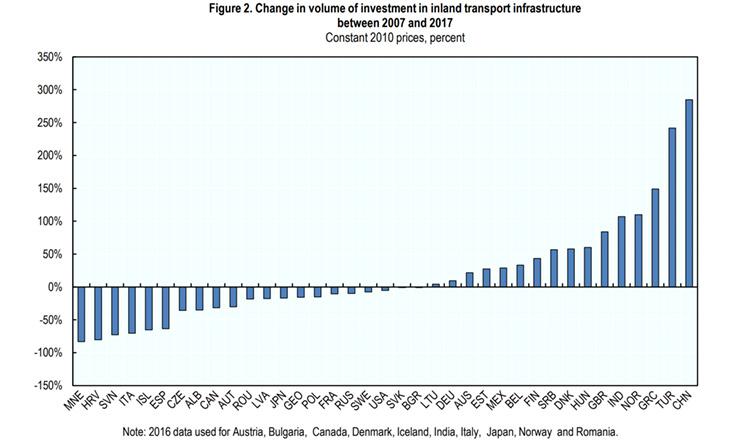 Shifts in investments between road and rail

In Western, Central and Eastern Europe, there are contrasting trends in the evolution of the share of inland transport infrastructure investment used for road over the past decade (Figure 4). The largest increase in road share of inland transport infrastructure investment took place in Georgia, where it grew from 37% (2007) to 87% (2017). During the referenced years, railway investments in Georgia (in constant euros) decreased by 82% while road investments doubled. The most significant declines in share of spending on roads when comparing 2017 to 2007 were Slovenia decreasing by 37 percentage points (91% to 55%), Denmark by 33 percentage points (82% to 48% in 2016) and France by 24 percentage points (74% to 50%). In terms of volumes of expenditure in constant euros, Slovenia (-84%) and France (-40%) spent less on roads and more on rail (+45% and +76% respectively). 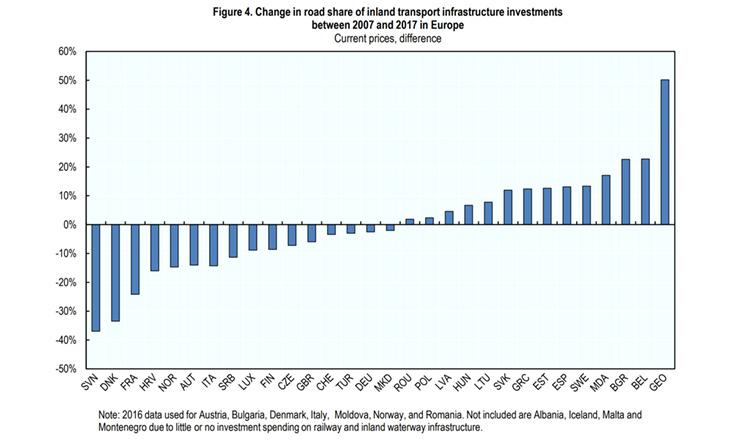 The most notable modal shift in inland transport infrastructure investments between 2007 and 2017 among the selected countries in Figure 5 is a decrease of 23 percentage points in the share of spending on roads in Mexico (79% to 57%). In constant euros, railway investments grew 171% in Mexico compared to the previous decade and road investments decreased slightly (-8%). China and the Russian Federation experienced visible increases in their shares of road investments for the period referenced (+10 and +12 percentage points respectively), but for different reasons. While the Russian Federation trend stems from a decline in rail investments (-35%), in China the trend was due to stronger growth in road investment (+336%) compared to that of rail (+141%). 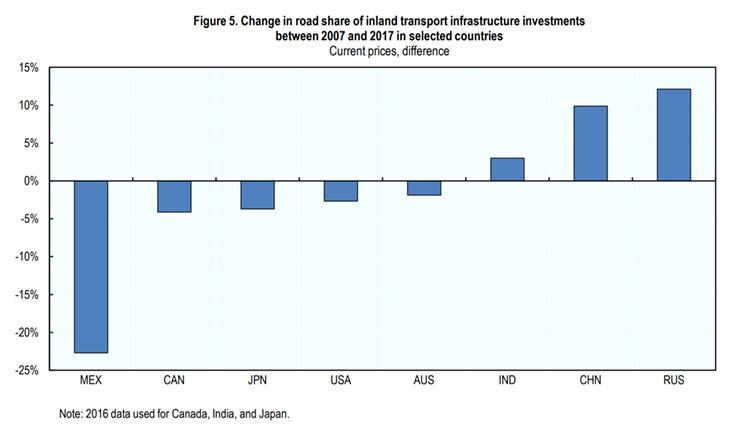 The largest declines in public maintenance spending on roads as a share of total road expenditure in 2017 compared to 2007 were in Hungary (68% to 22%), Bulgaria (62% to 27%), the United Kingdom (48% to 22%), Serbia (43% to 24%) and Poland (31% to 14%). In constant euros, these countries also have the most notable decreases in public maintenance spending on roads for the referred years, with Hungary experiencing the strongest decline (-76%). Between 2007 and 2017, most of these countries also showed notable growth in road investments in constant euros (Bulgaria +97%, Hungary +77%, the United Kingdom +59%, Serbia +38%), which further contributed to their decreased public maintenance road share. 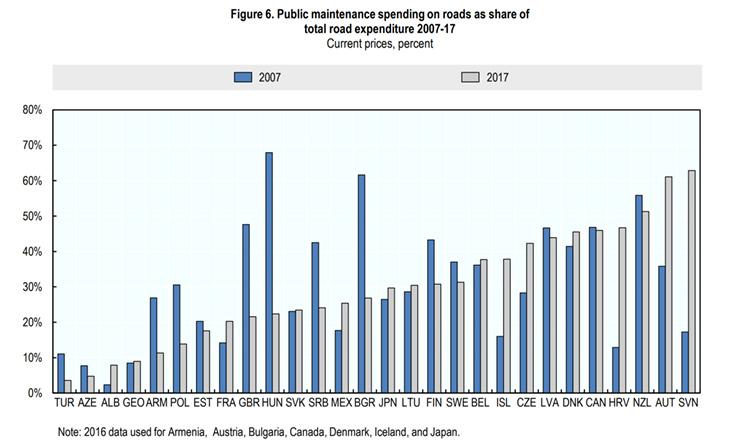 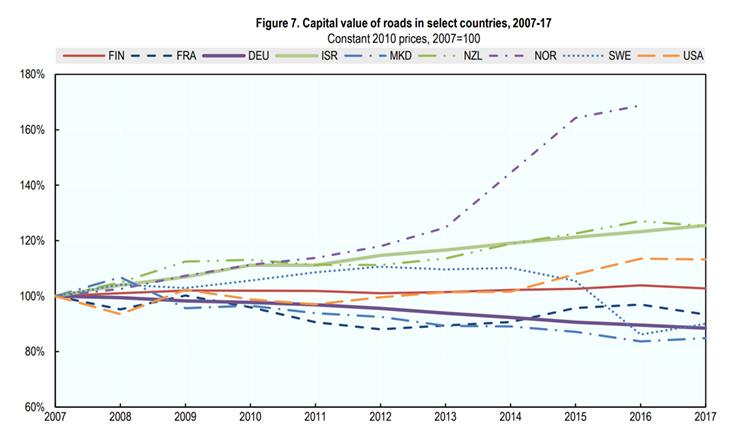 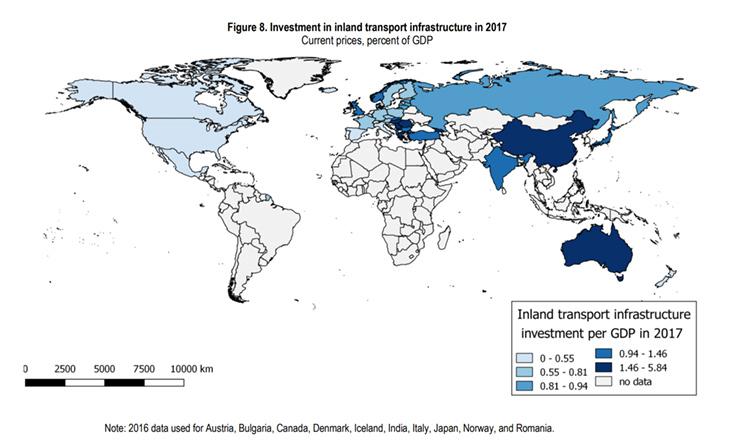 The International Transport Forum statistics on investment, maintenance expenditure and capital value of transport infrastructure for 1995-2017 are based on a survey sent to current ITF member countries. The survey covers total gross investment (defined as new construction, extensions, reconstruction, renewal and major repair) in road, rail, inland waterways, maritime ports and airports, including all sources of financing. It also covers maintenance
expenditures financed by public administrations and capital value of transport infrastructure.

The Secretariat has collected and published data on this topic since the late 1970s. Member countries supply data in their national currency and the data are then converted to current euros and constant euros. The Secretariat has devoted significant efforts to collecting relevant deflators needed to calculate the constant euro equivalent of data provided, since there exists no purchasing power parity corrected general index for transport infrastructure
investment. Where available, a cost index for construction on land and water is used. Where these indices are not available, a manufacturing cost index or a GDP deflator is used.

Despite the relatively long time series, these data are often dogged by definition and coverage inconsistencies between countries, which make international comparisons difficult. For the capital value data in particular, there are
notable differences in precision of estimation methods (4). We therefore advise caution when making comparisons of data between countries and instead recommend comparisons of trends. Furthermore, when analysing the capital value data or indicators such as the inland transport infrastructure investment share of GDP, it is important to take into account the quality and age of existing infrastructure, the maturity of the transport system, the geography of the country, the transport-intensity of its productive sector and its transport infrastructure developments.

Detailed country data for inland modes, maritime ports and airports along with more detailed data descriptions and notes on the methodologies are available at: https://stats.oecd.org/Index.aspx?DataSetCode=ITF_INV-MTN_DATA
If you would like to receive more information about this Statistics Brief, please contact Ms Ashley Acker.

(3) The statistical data for Israel are supplied by and under the responsibility of the relevant Israeli authorities. The use of such data by the OECD/ITF is without prejudice to the status of the Golan Heights, East Jerusalem and Israeli settlements in the West Bank under the terms of international law.

(4) The capital value of infrastructure is most commonly estimated using historical cost accounting with the perpetual inventory method (PIM) or current cost accounting, which evaluates the current value of all assets.