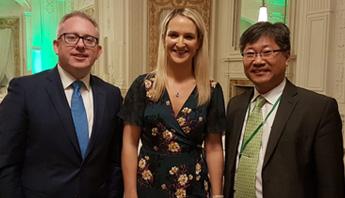 ITF Secretary-General Young Tae Kim held bilateral talks with Shane Ross, Ireland's Minister for Transport, Tourism and Sport, in Dublin, Ireland on 22 October. Ireland will assume the ITF Presidency of the ITF in 2019-2020, beginning directly after the 2019 Summit. This will include Ireland hosting the ITF's Transport Management Board, Transport Research Committee and Corporate Partnership Board meetings in November 2019. Ireland will preside over the Council of Ministers in Leipzig, Germany in 2020.

Mr Kim and Mr Ross also reviewed preparations for the ITF 2019 and 2020 Summits and possible scenarios for international road transport in the light of the upcoming Brexit. Also attending the meeting were Graham Doyle, Secretary General of the Irish Department of Transport and Helen McEntee, Minister for European Affairs (photo).

Mr Kim together with Minister Ross and Secretary General Doyle opened the autumn 2018 Session of the Group on Road Transport organised on 22 and 23 October in Dublin at the invitation of Minster Ross. The Group manages the Multilateral Quota system of transport licenses for pan-European road haulage. The licenses enable hauliers to undertake an unlimited number of multilateral freight operations in 43 European member countries participating in the system.

More on the Group on Road Transport