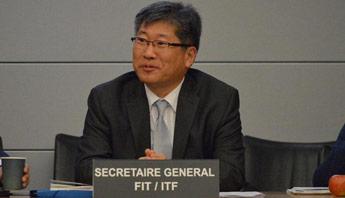 Secretary-General Young Tae Kim provided his report on ITF activities to members of the Transport Management Board (TMB) during their 29th session, held in Paris, France, on 28-29 March (photo). The TMB gives direction to ITF's work. It consists of the representatives of ITF's 59 member countries and meets at least twice per year. The TMB is currently chaired by Korea, which holds the ITF 2018-2019 Presidency.

The introduction of autonomous vehicles formed the Transport Policy Debate session of the discussions. Amongst the many contributions from member country representatives were presentations from France, Hungary, Korea and the Netherlands. Each provided a review of their policy approach towards the challenges of self-driving technology.

Final preparations for the world's premier transport policy event, the ITF Annual Summit, took place ahead of the TMB meeting. The fourth meeting of the 2019 Task Force on Transport Connectivity for Regional Integration worked to finalise elements of the Summit's programme and conclude preparations for the arrival of ministers at the Summit to be held in Leipzig, Germany, from 22-24 May.

Go to more information on the Summit