Plotting a more sustainable course for the international shipping sector 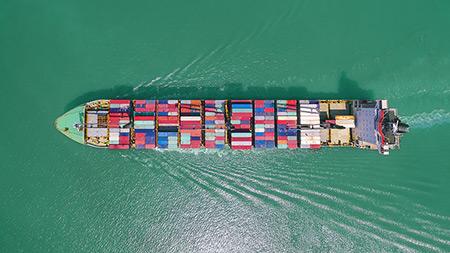 International maritime shipping currently accounts for about 800 million tonnes of carbon dioxide equivalent (CO2e) emissions per year, a figure that could almost double by 2060 under current energy and climate commitments made by the International Maritime Organization.

In contrast, achieving the ambitious goal of maintaining average global temperature rise to below 2 degrees would require first stabilization of international maritime shipping within this decade, and ultimately a decrease to below 400 million tonnes of CO2e per year by 2060.

To highlight how this target could be reached, the IEA, in co-operation with the International Transport Forum (ITF) at the OECD, made a submission (PDF) to the second Intersessional Meeting of the Working Group on Reduction of GHG emissions from ships (ISWG-GHG) of the International Maritime Organization (IMO). 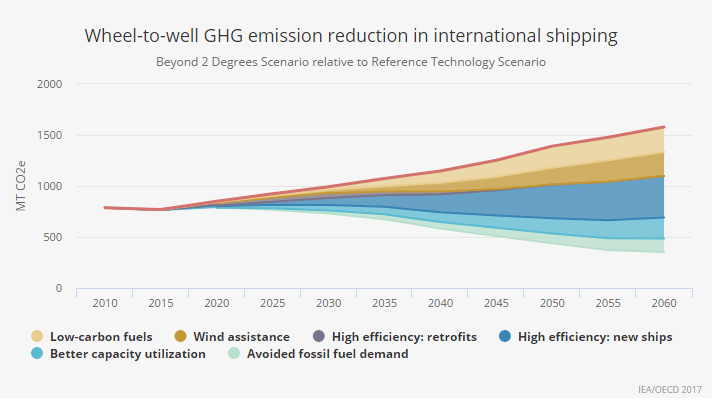 Improved efficiency, including wind assistance, accounts for the largest share of potential emissions reductions. Efficiency improvements are also likely to come at a lower cost than changes in the carbon content of fuels, or a switch to other low-carbon fuel sources.

Due to their long lifetime, many of the ships operating today will continue to be in operation in 2030. A significant portion of the efficiency improvements will therefore need to take the form of retrofits.

Stimulating the market to make such investments would require a range of measures. These include the tightening of the IMO Energy Efficiency Design Index, the rapid development of an operational efficiency standard and the adoption of a carbon price for shipping fuel. In addition, decarbonizing maritime transport will require the development of low-carbon fuel standards and the support for the deployment of zero carbon fuels and ship technologies.

These top-down measures could be complemented by bottom-up measures, at the port, national and regional levels. Such measures could include port-based incentives and national and regional carbon pricing and market-based mechanisms. Making port-based incentives mandatory could also encourage change, by scaling port fees for ships based on their environmental performance.

This report assesses the potential of zero carbon supply chains via a case study of the freight transport chain linked to the port of Hamburg. It analyses the initiatives taken by selected main...

- While most regions saw minimal change in rail freight flows since 2010, rail tonne-kilometres declined in the large majority of ITF countries with available data between 2018 and 2019 (Figure 1...

A new report by the International Transport Forum explores ways to reduce carbon emissions and air pollution from ships. The publication coincides with the 75th meeting of the Marine Environment...

Video of Navigating towards cleaner maritime shipping This report analyses future energy-use in the shipping sector of the Nordic region. It centres on pathways that could allow the Nordic...

This report assesses the business case for commercial navigation through Arctic waters along the Northern Sea Route and offers insights in the possible impacts on global trade flows.See related...