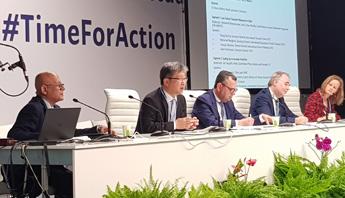 After the COP25 climate talks in Madrid, what are first take-aways for transport?

The public had hoped for progress, experts had demanded it, and the conference motto "Time for Action" had made it the benchmark – yet as the COP25 climate talks in Madrid, Spain, wound up on 15 December, two days later than planned, a broad consensus was that very little has been accomplished.

In the run-up, the ITF had highlighted that the objectives of the Paris agreement cannot be met without the decarbonisation of transport. It had pointed out that even if all current and planned transport CO2 mitigation measures were implemented, this would still not suffice to contain global warming. Yet the conference gave no signal of increased ambition or a move from announcements to action. Still, only about 10% of Nationally Determined Contributions (NDCs) set concrete transport CO2 reduction targets and many measures listed are quite unspecific.

Not all was gloom, however. The "New Green Deal" announced by the European Commission during COP25 is an ambitious regional decarbonisation agenda, backed by many ITF member countries, for which the ITF can offer support in translating its transport dimension into actions with real impact.

A Transport Ministerial as part of COP, which would have been the first ever, in the end did not take place, but this initiative, launched at the ITF's 2019 Summit by Chile's Transport Minister Gloria Hutt, in close co-ordination with her cabinet colleague Carolina Schmidt, Chile's environment minister and COP President, plus strong backing from the UNFCCC, nevertheless increased the visibility of transport at the talks – and beyond.

For the first time, the "Transport Day" was part of the official COP Presidency programme, offering more opportunities to engage negotiating Parties. Several national delegations held transport-related events (among them the UK, the incoming COP presidency) or participated in them (Sweden's Head of Delegation spoke at the ITF event on "Global Dialogue for Sustainable Transport: National Pathways and Transport Actions"). Overall, the ITF organised or participated in no less than 15 events and bilaterals which highlighted the role of transport in decarbonising the economy and society.

Looking forward, the ITF will push ahead with developing practical and political tools to make it easier for governments to implement decarbonisation measures.

In May 2020, the ITF will launch a catalogue of effective measures as part of its Decarbonising Transport initiative at its Annual Summit in Leipzig. The catalogue will offer policy-makers an arsenal of tried-and-tested measures from which they can select those that are known to deliver on specific decarbonisation objectives. On the political side, a Ministerial Roundtable on transport and climate change at the ITF Summit will follow up on COP25 and make the link to the upcoming Glasgow COP, where the first revision of NDCs will be on the agenda.

It is not possible to decarbonise transport without the involvement of non-transport players, such as the energy sector. Equally, other sectors cannot reduce their carbon footprint as long as transport remains dependent on fossil fuels – for instance trade or tourism. Integrated approaches and actions are needed. The ITF will therefore systematically expand its work with non-transport sectors.

In this vein, the UN World Tourism Organisation (UNWTO) and the ITF launched a joint analysis at COP25, based on UNWTO data and ITF modelling capability. The result suggests transport-related CO2 emissions from tourism will increase by 25% between 2016 and 2030. The energy sector is another obvious co-operation partner, given that electric mobility powered mainly by dirty coal-fired power plants is still dirty mobility. The close proximity of the UN Global Sustainable Transport Conference, Clean Energy Ministerial of the International Energy Agency (IEA) and the ITF Summit in May 2020 could offer opportunities to address issues in a comprehensive way.

Finally, ITF will continue to work with the UNFCCC as a focal point for transport in the Marrakech Partnership for Global Climate Action and seek to strengthen the links between transport stakeholders and the negotiating parties. The mandate for the Marrakech Partnership - the UNFCCC's engagement mechanism for non-government actors such as cities, regions, businesses or investors - will have to be renewed by signatory countries of the UN Climate Convention in 2020, presenting an opportunity to better connect thinking on the level of national governments and of society at large.