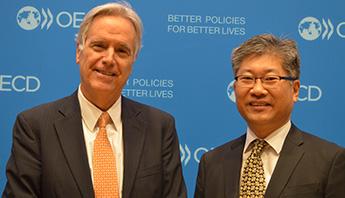 Chile’s OECD Ambassador sets out the host country’s road map for the negotiations, with a focus also on transport

In December 2019, the 25th Conference of Parties (COP) to the UN Framework Convention on Climate Change (UNFCCC) will meet in Santiago de Chile. Chile’s ambassador to the OECD, Felipe Morandé, outlined his government’s agenda for the climate negotiations involving 196 countries (plus the European Union) in the first ITF Special Lecture on 5 September at the OECD, on invitation of ITF Secretary-General Young Tae Kim (photo).

COP25 will be a pivotal moment for efforts to limit climate change and its impacts. The Santiago conference will be the last round of negotiations before countries have to update their Nationally Determined Contributions (NDCs) under the Paris Agreement in 2020. If these contributions do not become much more ambitious, global heating will not be stopped.

Transport contributes around 23% of energy-related CO2, and its share is growing. But transport is hard to decarbonise because it is 92% dependent on oil. And although the majority of NDCs evoke transport decarbonisation, the measures often remain unspecific. On the other hand, many initiatives are being taken by the transport sector that are not echoed in the NDCs. “There has to be some reordering to get more consistency", Ambassador Morandé noted.

To strengthen the political role of the transport sector in shaping the NDCs, Chile is inviting transport ministers from around the world to be part of the core COP negotiation - a first since the COPs started in 1995. Ministers with responsibility for transport will meet on 6 December 2019, during the first week of the COP, following on the COP “Transport Day”.

A central aim, according to Ambassador Morandé, is to “generate a high-level relationship between the authorities that design transport polices worldwide, in order to make visible the commitment of governments.” Chile’s initiative takes previous efforts by the ITF to a new level. At its Annual Summit, the ITF has been bringing together Transport Ministers from its member countries at a Roundtable on Transport and Climate Change for some years.

Chile now envisages the dialogue “to continue to take place at each ITF Annual Summit and COP going forward”, creating in effect a roughly six-month rhythm in which political decision makers for transport could co-ordinate on the most pressing issue the world is facing today.