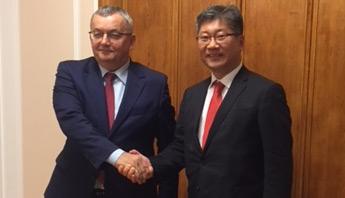 ITF Secretary-General Young Tae Kim visited Warsaw, Poland, to strengthen ties with key transport leaders on 11 December. Mr Kim met with Minister of Infrastructure Andrzej Adamczyk (photo) to discuss Poland's transport policy priorities as well as related ITF work and activities including rail and air transport. Poland is actively engaged with ITF work: Minister Adamczyk attended the 2018 Summit and spoke in two Ministers' Roundtables on COP23 and Barriers to Efficient International Road Transport. Poland has maintained an official representation at the Summit at a high-level political level on a regular basis. In 2017, the official delegation was headed by Undersecretary of State (Deputy Minister) Jerzy Szmit.

Poland is one of the active and important members of the Group on Road Transport, contributing to various aspects of the Group's work. This includes actively participating in the development of the Multilateral Quota system and the Quality Charter. The Central European nation participates at a high level at the Group meetings, as well as the meeting of the Sub-Groups.

At the meeting, Mr Kim and Minister Adamczyk reviewed issues of high importance to Poland's transport policy development. These included discussions on the threat of terrorism and barriers to transport related to protectionism. Poland has developed a National Transport Strategy to 2020 (with perspectives to 2030). It is the first global strategy for the transport sector adopted in Poland. Endorsed in 2014, it aims to ensure coordination between all transport modes and infrastructure projects. It sets the main goals and priorities for the transport sector, including logistics and urban transport and it aims at improving transport accessibility, safety and efficiency, and Poland’s international connections. The meeting follows ITF's strong presence at the UNFCCC COP24 meetings held in the Polish city of Katowice from 3-14 December.

While in Warsaw, Secretary-General Kim also met with Organisation for Co-operation between Railways (OSJD) Chairman Tadeusz Szozda. They discussed opportunities for cooperation and OSJD's participation at the 2019 Summit.

See more on the 2019 Summit of Transport Ministers