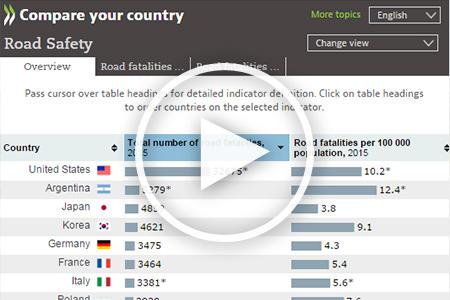 Over 1.3 million people are killed on the world's roads every year, and tens of millions are seriously injured. Through its permanent working group on road safety, known as IRTAD, ITF aims to advance international knowledge about road safety and contribute to reduce the number of traffic casualties. With 80 members and observers from more than 40 countries, IRTAD has become a central force in the promotion of international co-operation on road crash data and its analysis. It has been hailed as “model of a multi-country effort” and its crash data described as “simply the best in the world”.

The basis for our road safety work is the International Road Traffic and Accident Database, created in 1988. The IRTAD database collects and aggregates international data on road crashes; it thereby provides an empirical basis for international comparisons and more effective road safety policies. The database includes validated data for 32 countries. Most of IRTAD data can be found in IRTAD's Road Safety Annual Reports. Online access to the full IRTAD database is available for subscribers via the OECD statistics portal.

Over the years, IRTAD has come to stand not only for the database, but also for the International Traffic Safety Data and Analysis Group (or IRTAD group, for short). The IRTAD group brings together road safety experts from national road administrations, road safety research institutes, International Organisations, automobile associations, insurance companies, car manufacturers and others. It is chaired by Professor Fred Wegman, Netherlands.

Since 2008, IRTAD has facilitated twinnings between countries striving to improve their road safety record by enhancing their road crash data and countries who are among the top performers. This work has been supported by the World Bank, the Inter-American Development Bank (IADB) and the FIA Foundation. The twinning between Argentina and Spain in 2011 spawned the Ibero-American Road Observatory (OISEVI), a co-operation platform for the directors for road safety from 18 Latin American and Caribbean countries. IRTAD supports OISEVI through the Spanish-language IRTAD-LAC database.

With support from the Fédération Internationale de l’Automobile (FIA), IRTAD has set up Safer City Streets, the global traffic safety network for liveable cities, which brings together cities from around the world to collaborate on improving urban road safety.