Road freight volumes continued to grow in 2020, while goods transport by other modes slowed down compared to the 2017-2019 baseline period

Freight volumes between the pre-Covid baseline period (2017-2019) and 2020 have evolved very differently depending on the country and the transport mode.

Figure 1. Growth rate of surface freight transport between the baseline period (2017-2019) and 2020 by country, Percentage 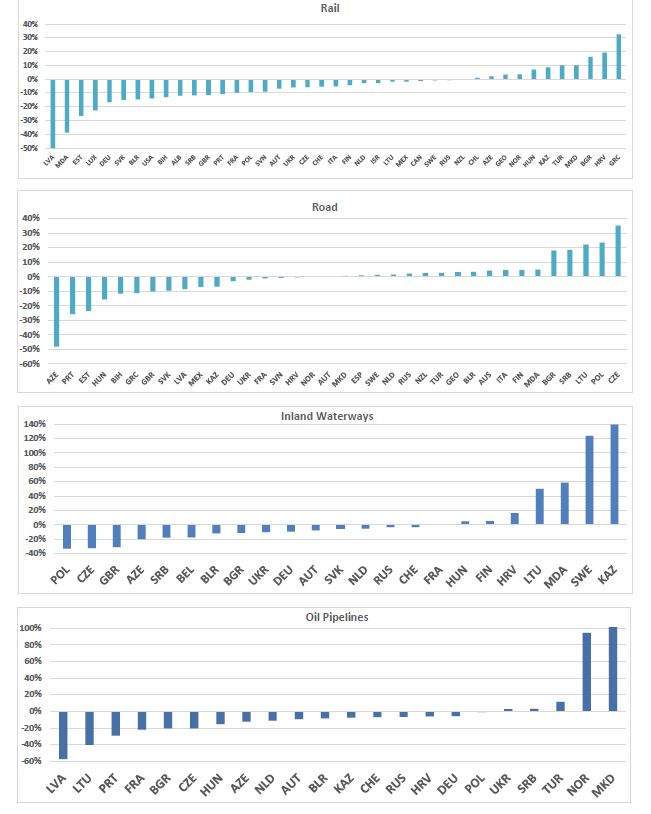 When comparing the growth rates between 2020 and the baseline period for OECD countries, maritime gross tonnage increased in Norway (+14%), Belgium (+9%) and Turkey (+7%). TEU had the highest compound annual growth rates during the referenced period in Norway and Belgium (both +14%), Turkey (+8%) and Greece (+6%).

Figure 2. Containers loaded and unloaded in seaports in OECD countries, 2010-2020

Both rail and car passenger transport decreased in all countries with available data in 2020 (Figure 3), compared to the 2017-2019 baseline period.

For car passenger transport, only nine countries among ITF countries have available data for 2020. The most significant shift in passenger car transport was in Kazakstan (-52%), France (-20%), the United States (-13%), the Czech Republic (-11%) and Norway (-7%).

Figure 3. Growth rate of passenger transport by car and rail between the baseline period and 2020 by country, Percentage

While most regions in Figure 4 succeeded in reducing the number of road fatalities since 2010, the decline has been more pronounced in 2020, undoubtedly linked to travel restrictions during the pandemic. The European Union, associated with Turkey, is the region with the most significant decrease in fatalities between 2020 and the baseline period (-20%), followed by Japan and Korea (-18%), Israel and Chile and Mexico (both -12%). The only region where road deaths increased in 2020 compared to the baseline period is USA and Canada, with a 5% increase for the whole area, led by the USA (+5% compared to -6% for Canada).

The data presented in this Brief are from the ITF survey “Trends in the Transport Sector”, which includes variables on freight transport, passenger transport and road safety. Road safety data include the number of road accidents, injured, and fatalities (30 days). The data series start in 1970 and continue until the current year-1, or the most recent available data. The survey is completed by member countries, processed by ITF statisticians and published each year on 31 October.

Although there are clear definitions for all the terms used in this survey, countries might have different methodologies to calculate tonne-kilometre and passenger-kilometres. Methods could be based on traffic or mobility surveys and may use very different sampling methods and estimating techniques, which can affect the comparability of the statistics. Additionally, while the definition of road fatalities is consistent across most countries, this is not the case for road injuries. Not only do countries have different definitions, but there is underreporting of road injuries. However, data for individual countries are usually consistent over time and useful for identifying underlying trends. It is recommended to read the metadata in order to check the coverage of data for each country.

If you would like to receive more information about this Statistics Brief, please contact Ms Aurélie Kopacz (aurelie.kopacz@itf-oecd.org). Detailed data descriptions and notes on the methodologies are available at the following links:

Published every two years, the ITF Transport Outlook provides an overview of current trends and near-term prospects for the global transport sector based on the ITF’s in-house modelling. It provides...

The Covid-19 pandemic has changed how people live and move, especially in urban environments. As many cities transition towards living with the virus, this presents challenges and opportunities to...

ITF Secretary-General Young Tae Kim leads an ITF delegation to Uzbekistan. During the mission, ITF experts will present the findings of study of the feasibility of implementing sustainable urban...

The ITF team brings together policy makers and other stakeholders from Azerbaijan and countries in the region to advance the decarbonisation agenda. It provides an opportunity to: