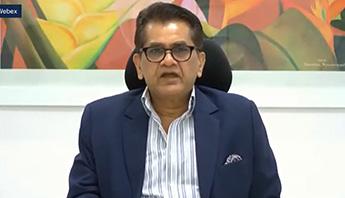 The four-year “Decarbonising Transport in India” project launched on 24 June in a webinar with ITF Secretary-General Young Tae Kim and senior Indian government officials. The project will help India develop a pathway towards a low-carbon transport system through the development of modelling tools and policy scenarios.

ITF Secretary-General Young Tae Kim hailed the collaboration as ”a very important and promising undertaking”, not least as an “opportunity to further strengthen the relationship between India and the ITF.”

The transport sector is India’s is third-most greenhouse gas (GHG) emitting sector. As much as 13% of India’s carbon dioxide emissions come from the transport sector, more than three times of what it emitted in 1990.