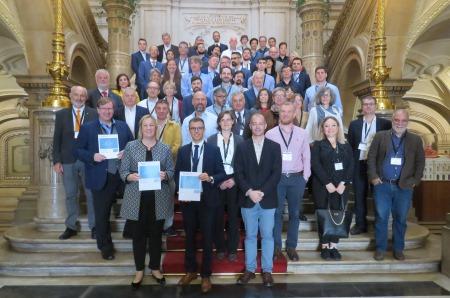 The ITF Safer City Streets initiative offers a platform for road safety experts to share their experience and develop a global database at city level. A full network meeting took place in Lisbon, Portugal, on 16-17 October 2019. The agenda reflected the priorities of the host city, which include vision zero, pedestrian safety, micromobility and the role of data in supporting policy making. ITF and the POLIS network worked together to organise the meeting, similarly to the 4th meeting held in London and Manchester, UK.

The event was attended by representatives from 15 cities, with a total of 95 participants. The meeting represented a capacity building opportunity for most attendees, including many delegates from the city of Lisbon.

On Friday, 18 October, the ITF organised a workshop on micromobility safety, as part of the ITF Corporate Partnership Board (CPB) work programme. This was a chance to identify solutions based on a true dialogue between the industry and local government.

The ITF Safer City Streets initiative was launched in October 2016 at the UN Habitat III Conference. Thanks to the support of the FIA Road Safety Grant programme, as well as the support from ITF's International Road Traffic safety Analysis and Data group (IRTAD), it has grown rapidly to include over 40 cities and offers a global database for road safety performance. The initiative's results include the publication of a global road safety benchmark. Network meetings are organised at least once a year, generally hosted by a member city. Most participants are from local government, road safety research organisations, NGOs and development banks. The previous meeting in Buenos Aires attracted over 90 participants.

The ITF Road Safety Annual Report 2021 examines the development of road safety in the year 2020 during the Covid-19 pandemic. It assesses how the pandemic has affected mobility patterns and impacted...

This report examines and determines the most relevant cases for artificial intelligence (AI) use in a transport planning context for crash prevention on an entire road network. It explores the...

ITF Secretary-General Young Tae Kim joins virtually to speak in the first panel.The meeting is convened by the President of the General Assembly with support from WHO and the UN Regional Commissions...

The Next Steps in the Safe Reopening of Global Travel: Ensuring Harmonization around Risk-Based Approaches (Virtual meeting)
25 January

Group on Road Transport: Sub-Group on the Qualitative Development of the ECMT Quota (Virtual meeting)
28 January