18 September 2022 - 17 September 2024
MaaS gives users access to different mobility services through the same digital interface. It simplifies planning and booking trips that use different transport modes. The ease of use can encourage...

20 September 2021
CBA methodology continues to develop, and guidance documents increasingly require or encourage a wider range of impacts in the analysis. This tendency is both the result of a desire for more complete...

21 June 2021
ITF Gender Analysis Toolkit for Transport offers governments, international organisations, contractors and all those who work on transport projects a hands-on tool to carry out gender analyses and... 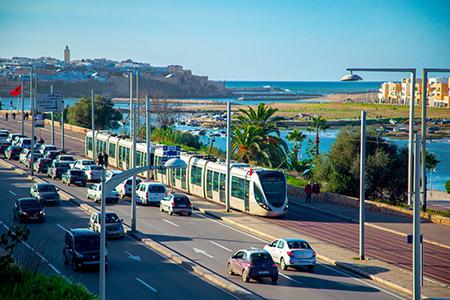 Morocco’s economy is well diversified, dominant by industry and services. For instance, nearly 230 000 cars were assembled in the country by France’s Renault Group. Morocco also aims to become one of the world’s top 20 tourist destinations by 2020.

Morocco was responsible for around 100 MtCO2eq in 2012, equaling 0.3% of global CO2eq emissions. Total emissions per capita were 5 tonnes of CO2eq in 2010, less than half the OECD average.

The country's NDCs aim to reduce energy consumption in buildings, industry and transport by 12% to 2020 and by 19% to 2030. This would mean 23% less energy consumption for the transport sector. Transport currently accounts for around 29% of total fuel combustion emissions in the country, the highest share among the four focus countries of this project. Carbon emissions of transport per inhabitant stood at 0.43 tonnes of CO2eq in 2010.

Transport activity in Morocco is set to expand. Freight volumes could see an annual increase of 4% and passenger volumes of 5%, according to ITF estimates. This corresponds to around two times the estimated rate of increase of transport volumes in OECD countries.

The main challenge for decarbonising Morocco’s transport sector is to keep CO2 emissions in check while rapidly enhancing its transport infrastructure network, similar to the case of Azerbaijan. Modernising the road and highway network is a government priority. This aims primarily at improving connectivity between Morocco’s urban centres and providing better infrastructure for tourists. One result could be a rise in road traffic and related emissions. Developing public transport in cities is one mitigation measure envisioned in the Moroccan NDCs.