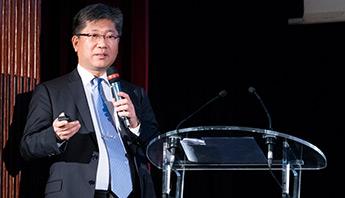 Railways are an essential part of our transport systems. Rail can competitively transport large numbers of people – both quickly between cities and reliably in cities – and large volumes of freight. It offers significant land-use advantages as it occupies less space than road: the land take for by rail per person-kilometre is 3.5 times less than that of road transport. For moving large flows of freight, rails hold a significant price advantage with costs between three and six times less than for road.

ITF Secretary-General Young Tae Kim highlighted rail's fundamental place in the transport mix during a speech at the International union of railways (UIC) Special High-Level Roundtable "For a Sustainable, Integrated, Connected, International Chain of Mobility" in Paris, France, on 6 December (photo). With the COP24 meetings already underway in Katowice, Poland, Mr Kim highlighted rail's critical role in achieving climate change mitigation. Rail's carbon emissions per tonne-kilometre are around eight times less than that for road transport, positioning rail as an answer to the burgeoning demand for transport services, particularly in non-OECD countries. Electrification is already far advanced in the rail sector when compared with other modes, making it particularly attractive for transit development for sustainable cities of the future.

Mr Kim also provided insights from ITF work into rail markets and service provision. Research shows that freight markets are essentially suited to a competitive private supply of rail services, as the success of commercial railways in the United States demonstrate. State-owned passengers rail services which are operated with a clear commercial remit (Switzerland) or those run by commercial concessions (Japanese Shinkansen) have demonstrated success. However, where regional development and integration is a policy objective, there is a strong rationale for retaining railways in public ownership.